HomeNewsScreening of “The Uncondemned”: top cast interacts with attendees at the Embassy

Screening of “The Uncondemned”: top cast interacts with attendees at the Embassy 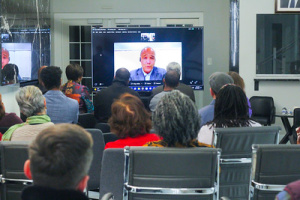 On Thursday, December 1, 2022, the Embassy of Rwanda screened “The Uncondemned”, an 81-minute film depicting the ordeal of women who were raped during the 1994 Genocide against the Tutsi in Rwanda.

The event, which is part of the Rwanda Movie Night series, attracted legal professionals from the Washington metro area, including lawyers, attorneys, paralegals, legal assistants, and law students.

Attendees, including other professionals from different fields, had the opportunity to interact with Amb. Pierre-Richard Prosper, the lead prosecutor in the first-ever trial that prosecuted rape as a war crime and act of genocide.

They reflected on the success of the prosecution and how this case could inspire solutions to address crimes of Genocide and crimes against humanity around the world.

The Uncondemned was co-produced by Michele Mitchell based on the trial of Jean-Paul Akayesu, a former mayor who is serving a life sentence handed to him by the International Criminal Tribunal for Rwanda.