HomeNewsRwanda and Nebraska to strengthen ties

Rwanda and Nebraska to strengthen ties 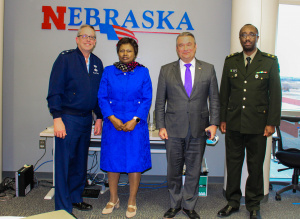 They were received by Maj. Gen. Daryl Bohac, Adjutant Gen. of Nebraska National Army, who took them on the tour of the base.

in the social, political and economic sphere of the country.

The meeting with the members of the Global Center for Health Security of University of Nebraska Medical Center expounded on expanding the existing partnerships with Rwanda to drive innovation through R&D to improve health care and response.

They had a productive conversation on various topics of common interest including partnerships in wild conservation, trade, security and other areas of bilateral collaboration.

“Great meeting with the Rwandan Ambassador. Strong and courageous leadership has led this country and its citizens from the brink of destruction in the 1990s to the precipice of greatness today. Thank you to the Nebraska National Guard for hosting us.” Rep.Don Bacon tweeted after the meeting.

The delegation was later invited to witness Patching Ceremony, a military tradition in which soldiers, upon their first combat deployment, receive a shoulder sleeve insignia. The ceremony is held in the presence of their family members.

In his tweet Maj. Gen. Daryl Bohac said, “It was such a privilege to host Her Excellency Ambassador Mukantabana and tell our story of the Nabraska National Guard and Nebraska Emergency Management Agency. Thank you Rep. Don Bacon and Nebraska Medical Center for joining us in important discussions for our future together.”